Drum and Bass fans, get the 8th May in your diaries as one of the biggest nights to ever land in London is going to go down! Big because of the stature of the two of the gentlemen whose party it is, Fabio and Grooverider! These two legends aligned forces 25 years ago and were at the forefront of what Drum and Bass was and now in everything it became, in all it’s forms. Their focus and dedication to the scene is second to none and has been noted by many of the best musical artists around the world.

The ‘ 25 Years Of Fabio and Grooverider ‘ event is being held at, The Forum, in London on May 8th and in true celebratory style they have invited along some of their good friends they have encountered on their magical music careers and some of them legends in their own right. Matrix & Futurebound, Drumsound & Bassline Smith, Micky Finn, Mampi Swift, Nicky Blackmarket, Jumping Jack Frost, Kenny Ken and Ray Keith are just a few of the names on the bill and there will also be 3 very special headliners announced 1 week before the event. Also on the bill are Rat Pack. 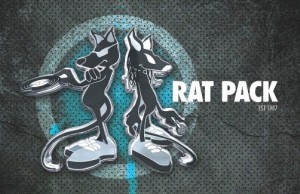 A few of the dj’s playing on the night have been asked to give a list of their ‘ all time ‘ top 5 tracks. Luckily LSM has exclusively been given the all time top 5 from one half of rave legends, Rat Pack’s, Lipmaster Mark. The words are form Mark himself and the tracks are as follows…

I’ve been playing this recently on our radio show on KoolLondon.com and I realised how much I still love the track just as when I first heard it.

Reminds me of good old days in Bagleys Kings Cross and it’s a track that takes you on a journey with its different parts. A true classic.

I remember Tony Wilson playing this upstairs in the Land of Oz at Heaven back in 1990 (I think) and loved it instantly. I love the sax and the flutes in this track.  It’s a nice chilled mellow summer tune, always good for a BBQ.

This one always used to rock Trip City back in the day around 1989 a monster classic that will always remind me of that era. It needs no words to explain itself.

Seeing as it was Hip Hop that influenced me in my earlier days this one was always going to be a winner for me. Phat beats, good rhymes, a timeless classic that always makes me rock when I hear it and always rocks when I play it.

Links to the Fabio & Grooverider event :