For the definitive take on one of the greatest rave tunes ever made, you need The Acen Trip II The Moon box set in your collection. As always with the incredibly productive Kniteforce label, all originals are remastered and a host of fresh remixes are included too from a diverse group of producers from CoCo Bryce to Scott Brown and more! 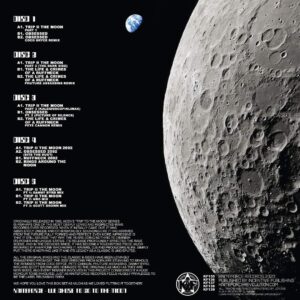 Syed Ahsan Razvi aka Acen is a true legend of the 90s rave scene, a producer and filmmaker who played an integral part in the rise of Production House Records. As the blurb to this collection rightly states ‘Trip II The Moon’ is one of the biggest tracks (all 3 parts) to come out of the early rave sound and way ahead of its’ time. All 3 parts feature on this collection along with a dubplate version of Pt II, a brand new Acen remake of TTTM, ‘Obsessed’ & ‘Ruffneck’ and a host of remixes. Also included is original versions  and a plethora of remixes and ‘Rings Around The Moon.’

In preparation for this blog, I looked for any interviews with the somewhat elusive Acen. I found a very good interview from the Bv2os forum and pasted the now defunct link into the Wayback Machine to discover a thoughtful connoisseur of music with tastes ranging from John Barry to Ennio Morricone (and I’m sure Angelo Badalamenti even if he didn’t mention the name). Sure Acen could do the bangers but his tracks always had and have a stand alone feel to them.

I think I heard ‘Trip II The Moon Pt 1’ for the first time on Radio One and although I wouldn’t hear it again until 1998 on Donovan Bad Boy Smith’s ‘Essential Oldskool Hardcore’ mix album, I never forgot how it sounds and the weird and wonderful places it took me. I listen to the Starship Enterprise bleeps and dark pads and it feels like I’m walking on the dark side of the moon. The Eric B & Rakim vocal really does get me hyped as does the sudden surges of bass and the jagged synth stabs. The Sci Fi music drops and Bond music samples act as the perfect mind melt moments before the mayhem kicks back in. For a track made in 1992, TTTM Pt 1 does not sound the least bit old.

This is the first time I’ve heard ‘Obsessed’ and my assessment is that of hearing a tune that save for a few signatures does not sound like the Hardcore of it’s time. The John Carpenter style chimes and R&B vocals (of which Acen is very fond) sound like 80s Electro and 95/96 meeting up somewhere in a hole in time. The whole track has an eerie beauty that precedes countless late 90s DnB tracks.

Rave wizard, Coco Bryce remixes ‘Obsessed’ taking it to it’s logical progression (no pun intended) through the filter of a rumbling Jungle roller that places emphasis on the cool scratches and breaks of the original.

‘Trip II The Moon Pt 2 ‘ is without doubt the most famous of the various versions. The spooky af classical piano, Tongue & Cheek sampling helium vocals and the dark descent into hoover mayhem followed by the huge ‘You Only Live Twice’ sample is not something you could ever forget. This version is a stroke of creative genius and it must be said these fresh remasters bring out the best in TTTM and all the other tunes on this box set.

Next up is my absolute favourite Acen track ‘The Life And Crimes of a Ruffneck’, a track that strongly hints at Acen’s Hip Hop roots with loads of scratch samples and dark stabs similar to TTTM Pt 1 and ‘Close Your Eyes.’ All this leads up to the sample of Chi Mai by Ennio Morricone and a bit of Googling uncovers the clever allusion to an old BBC drama scored by Morricone.

Now when was the last time you heard the name Phuture Assassins? Perhaps the Suburban Base releases from around 91/92 such as Future Sound and Roots N’ Future? Well, Austin Reynolds aka Phuture Assassins returns for a remix of LACOAR that brings that oldskool Sub Base sound together with Austin’s mid 00’s Hardcore Breaks releases on Warehouse Wax for a massive Ragga Rave rerub.

I first heard ‘Trip II The Moon Pt 3’ about 9 or 10 years ago. Listening to it now with a fresh remaster makes me think how misunderstood Breakbeat Hardcore is to this day. There are a few narratives regarding the roots of Hardcore but Acen lays it bear for all to hear with his incredible hodge podge of Soul, Funk, Hip Hop, Classical and of course Techno. TTTM Pt 3 is ‘piano tune’ of the trio with an eerie tension and the fulfilled promise of reward in a truly superb piano section.

‘Obsessed Part II (Pictures Of Silence)’ feels like the successor to TTTM3 with more thoughtful piano and bleeps, layers of deep darkness and pristine soul like a Hardcore film score.

‘Life & Crimes Of A Ruffneck’ gets the Pete Cannon treatment, reinterpreted into Pete’s signature Amiga Jungle sonic sphere at breakneck amen speed with all the elements of the original at almost double the speed yet still sounding amazing. If you ever wanted to drop an Acen tune in a jungle set, now you can!

In addition to the many versions of TTTM, Acen gives us ‘Trip To The Moon 2092.’ The latest trip opens with a nod to the Amiga Hardcore era with dark hoovers into an up to date rendition of the pounding breaks of Pt 2 and refreshed parts from Pts 1 & 3 with the electro tinged vibe of Acen’s recent productions.

‘Obsessed 2092 (Bite The Dust)’ is proof you really can improve on a classic if you have the skills and Acen most certainly does! Those haunting keys and sublime pianos remain (in fact they sound even better) with additional electro style bass and crisp Jungle Breaks.

Again ‘Ruffneck 2092’ brings those bleeps right up to date with a fullness like never before. The breaks are super clean and clear, the familiar pads of ‘Ruffneck’ get a weighty redo with some extra samples that add a tonne to the coolness of the original. And then there is the brand new Art Of Noise ‘Moments In Love’ inspired drop and the vocals from Cuba Gooding ‘Happiness Is Just Around the Bend’ to take this remake to a whole new level of brilliance.

‘Rings Around The Moon’ takes the vocal from ‘Windmills Of Your Mind’ as the base for 5min 53sec of acid mayhem, kaleidoscopic keys and earth shaking beats, a hardcore opus if you will that really has to be heard to truly experience.

DnB legend Danny Byrd pitches ‘Trip To The Moon Pt 1′ up into 170BPM territory and into the Jungle with oldskool wobs, amens and that Bond music all packaged into one heck of a rave samasher! Oldskool Hardcore luminary NRG provides an inventive and original take on TTTM2 chopping up the pianos and hoovers and adding in new sections of his own to compliment the clever chops and pitch changes. Scottish Hardcore veteran, Scott Brown gives TTTM3 a brisk, bouncey UK Hardcore refix with the pianos replayed in euphoric 90s Happy Hardcore style that will cause memories to flood back to Bonkers era Happy Hardcore fans. Yes, it is possible to turn a breakbeat hardcore classic into a Happy Hardcore tune and yes, it sounds great!

The limited vinyl bonus remixes (Pre Sale only) start with the dubplate mix of TTTM2 featuring an alternate drop (I don’t know if its from a movie but I would call it 8 bars of euphoric bliss!). NYC Hardcore Techno bossman Omar Santana does a superb remix of TTTM1 that suits a wide range of tastes from DJ Producer style Industrial Techno to Crystal Method style stadium breaks. D-Bridges’ Desire Mix of ‘Obsessed’ takes us through dark Doc Scott esque DnB to futuristic Footwork in one fell swoop. The very last track on this 6 vinyl box set is Kniteforce boss, Luna C’s remix of TTTM keeping things faithful to the original with rejigged elements from all 3 popular versions plus detuned organs, and a brand new cinematic drop. Just writing about this has been an amazing experience, as previously stated the new masters bring out the detail and scope of Acen’s early work and the remixes are a genuine bonus.