Thanks for taking the time to chat with Lsm. Tell us a bit about yourself:

Tell us about your history with dance music…

Paul: I was born in the concrete jungle of Hackney of Irish origin and now live and work in South East London.

I’ve worked behind the scene since 1989. From pirate radio to record distribution to production, DJing and running various record labels around the world.

My music career began in Hackney way back in 1990 when I became involved in setting up pirate radio stations  in the UK, Spain, Cyprus and Tenerife.

Success in this field and a growing vinyl collection led me to to start a little promo company pushing vinyl to record shops that’s where I met some good people, namely Jeff from Bigdrum Records, Stevenage.

I Studied music production at Hurricane Studios, Deptford back In the late 90’s. I made some great signings over the years such as Orphix from Revoke records and Bonzai Progressive, He is now known as Full Circle, part of the roster for my new label, Proper Decent Choons

I founded Red Rose Recordings which went on to have many top ten records.

I then went on to co found PdC distribution and was the man pressing and distributing the likes of Bodygroove. Architects, Wiley, Nicole’s Groove, Love Custard and many more.

At this time, UKG/2 Step was packing out arenas far and wide  but big changes like the rise of Grime & UK Rap plus the onset of digital downloads meant vinyl sales slumped hard.

Things looked bleak for vinyl as record shops were closing one by one at an alarming rate. Despite this, I carried on running internet radio stations, podcasts and radio sync partnerships with my good friend Ashley Akabah from the Architects who sadly passed away in February 2020.

Paul: I think this could be a good story of hope in the music industry and the connection of friendship in music via social media.

So, a couple of years ago I sleep walked 89ft off a balcony whilst on holiday with my partner (Google DJ balcony fall Malta)  lots of news papers covered the story.

I fell off the balcony whilst on holiday in Malta back in 2019. My friends and family believed I was dead. I flatlined 3 times, the 3rd time I was being wheeled to the mortuary. When I came around 2 months later, my sister flew over to meet me.

That’s an incredible story. Now the news was out, what happened next?

Paul: So, obviously my 30 odd year music industry connections picked up on this and Mark Ireland (Hed Kandi) decided to share the fact I was out in Malta with no phone no clothes etc etc.

Although I did have all these things previously my accident was being investigated so Mark decided to send a message on his Facebook stating “one of our music industry soldiers has fallen”, to my amazement Robert (Mr Root) producer and DJ behind many disco crossovers, came and visited me, he went shopping for me out of his own cash and came and visited me.

My family had to go back to the UK to sort things with the embassy, and this stranger came and supported me on numerous occasions.

I said I would always be in this mans debt in some way even know he done it out of his kind caring heart.

What an amazing way we connected, I had nothing at all not even a pair of pants to my name. He went shopping for me on 3 or 4 occasions and if I didn’t have him come and see me I think my recovery would of taken much longer. It was the tonic that made me believe in humanity and a connection of strangers that are now lifetime friends.

So this all erupted through the power of social media and namely Facebook. So as much as people say Facebook this and that, Facebook helped carve the way for this magical connection from the digital world to the real world.

This is what strangers did for a stranger through the power of our music community.

After this series of tragedies, what made you return to music?

I felt like turning my back on music. I kept asking myself ‘what would Ashley want me to do?’ The answer dawned on me one day after speaking to Steve Ellington (during the first lockdown) who advised “Bruv music is you, you’re a door opener, come on…”. 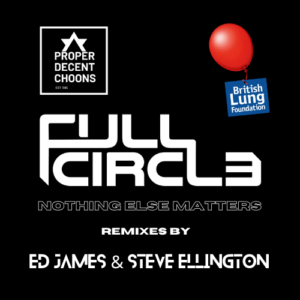 Fast forward to April 2021 and I’ve joined forces with 3 good friends to create a production house along with a media / record label, ‘Proper Decent Choons’  with Ed James (Full Circle, bringing back the proper UK Garage vibes) , Mr Roots (who has worked with some of the biggest names in House music including Bob Sinclair), and last but not least Steve Ellington of Sound Dwellers fame (who works with the likes of Jethro Sheeran). Ed James is shaping the UK Garage Scene with some future classics soon to released this year. He will be a sought after producer to work with.

Proper Decent Choons is working in partnership with the British Lung Foundation. We will donate % of sales from record releases and events to BLF. A website and app is in development and will be up in the next few weeks with some free downloads and up to date blogs and a radio network.

Proper Decent Choons is passionate about utilising the power of music to reach out to the less fortunate through outreach and training for kids with disabilities to get access to mentors in the Music community. We are more then a record label, we are a collective of like minded individuals who have the combined skill set of over 100 years to make impact in out communities through the power of music. For more info and to sign up to the mailing list Properdecentchoons@gmail.com

Our first release ‘Nothing Else Matters’ is due to be released over the May bank holiday.