Stepping up with a whole load of beats and beard is that man, Hostage. This time around it’s a double helping of music and first off is his new monthly mix. As always, quality music can be expected from the very start to the very end, with a selection of his current faves and new unreleased material on board. The mix itself is one that builds with intensity and carries a strong warehouse vibe. Dark, edgy Techno, House and Bass are to be found in this one hour mix. Get locked on to this one for some heavy duty aural pleasure!

The second helping of, Hostage music, comes in the form of this new four track EP called ‘Fluxx’ which has been released in collaboration with, Four Three Six. The idea behind this and several other collabs, Four Three Six have been involved in, is to bring back the lost link between music and physical art. The days of buying vinyl and not only admiring the music you just brought, but also the sometimes mind blowing artwork someone had taken great care to create, seem but a distant memory as the viewing space grew ever smaller.

Four Three Six, are hear to change all that though. What these guys do is hunt down a producer that’s really rockin’ it in their respective scene and kindly ask them if they could put together a four track EP for them. When said producer, in this case, Hostage, accepts and sends the music over, that then gets sent to an artist of choice, in this case the super talented Bristol graffiti artist, SPZero76. The artist/artists then immerse themselves in the music and use it as inspiration to create a piece of artwork to go on a quality t-shirt as part of a wearable release. When you buy the t-shirt, printed on the inside is the tracklist of the EP plus a code to download it. Instead of putting artwork on the wall or on a shelf, you get to wear this and look badass all at the same time! This is the t-shirt that you can buy and I’m sure you’ll agree, it’s pretty f*ckin’ sweet! 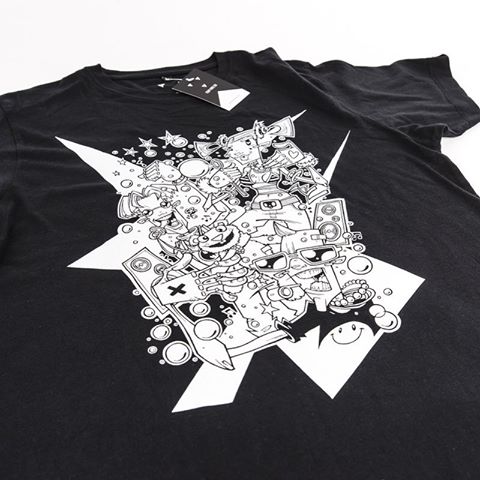 So now you’ve checked out the cool threads, on to the music that spawned such killa artwork! The EP from, Hostage, is hugely inspired by his love of 1990’s rave culture and hardcore Techno, the times of unity, love and respect. The title track off the EP ‘Fluxx’ is the perfect indicator of this inspiration, offering the peak time rave feel which gets a little darker as the EP goes on, right through to the final track ‘Kilt’ which is a proper ‘heads down, stomp on’ Techno monster. If you’re looking for nu-skool Techno, heavily laced with old skool flavour, these four tracks should be top of your list!