Sound Shifter’s first vinyl release is about to drop on Ghetto Dub. You can pre order it here. We catch up with the man for a detailed chat all about the (Jungle) music!

Read our review of the new Sound Shifter EP here

I have been feeling something from music all my life so it’s hard to be precise in that sense, especially when you are raised in a home where pretty much all forms of music were accepted however, I was 7 years old when Prodigy released ‘Everybody In The Place’ and I can safely say that this track was the one that attracted me to the rave scene.

It was the first time that I felt connected to specific style of music and hungered for more of the same so, we will say that The Prodigy, as the gate way drug, opened the doors to Jungle + Drum & Bass and to the sounds that became an integral part of my life. 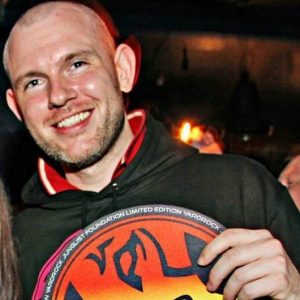 And how and when did you get into the jungle sound?

My older sister was looking for some heavier music and a family friend gave her a recording of a Jungle set from pirate radio, this was back in 1993 and I believe the station was Lightning FM but don’t quote me on that.

Anyway, my sister was actually looking for Heavy Metal rather than Jungle so fortunately, that tape got passed my way. If I were to put that tape into words, I can only think of saying that, ‘love and the universe have never been so good to me, God blessed my ears with a righteous sound and I haven’t looked back since’, Sound Shifter has been a Junglist since that fateful day!!

What convinced you to take the dive into music production and why?

I was 14, I went to visit a legendary friend of mine in Brighton, some plonker that goes by the name of DJ Disrupta. Anyway, he was already into mixing and had a set up with some vinyl. We both were addicted to Jungle & D&B and the experience got me hooked on learning how to mix. This was in 1998 just after Ram Trilogy released ‘No Reality’. So, during the summer holidays of that year I worked my ass off and saved money helping out my uncle’s business, bought a pair of Gemini turntables and a Vestax mixer, hit BM records and grabbed a load of 98s finest and within a year of mixing I realised it wasn’t enough.

I had to take it to the next level and start making my own sound, it was like an unknown force driving me in that direction, and it just made sense.

So, during the summer holidays of 1999 I did exactly the same thing for money and bought a computer, Cubase and some sample CDs like ‘That Jungle Flavour’ and began my journey as a producer. In essence it’s all down to the music that had such an inspiration on my life and simply wanting to pay my respects to that and keep flying the flag.

There is much heated debate in social media groups and internet chatrooms about what ‘Jungle’ actually is? How do you define the sound?

In all honesty I could write an essay about what ‘Jungle’ actually is and it would be worthy of a 2:1 at Oxford university. In doing so I would probably offend a lot of people and show just how much of a nerd I actually am when it comes to Jungle so, I will do my best to keep it short, sweet and concise and keep opinions amicable.

Jungle is supremely intricate with regards to drum patterns, no other genre compares, what the scene has done to those poor breaks is unforgivable yet beautifully unforgettable. Nothing floats my boat better than and Amen being chopped and stretched and clattered all over the place with pitched snares and crashes dancing in places you shouldn’t even be putting them. There are literally infinite variations that can be done to that break and many others and the effect is outstanding, its ingenuity at its finest.

Jungle has no rules!!!!!! You want to put a Ragga vocal sample over the top of an eerie musical score sampled from a budget horror movie, use a break sampled from a 70s Soul track along with a pitched up female vocal from a BBC documentary about Tribal women in the Amazon, filled in with a licking of a Japanese 808 that switches into a hardcore Belgian rave stab that morphs into hoover accompanied by cow bell and a slice of an acid arpeggiator, that all comes together with an amen that sounds like it went through a war with a tank then, yeah man, let’s do it, anything goes!!!
Mini rant!!!!

I just want to stress that the scene should be loved and appreciated in all of its glory and that truly comes from the heart. The roots spread wider and farther than what most people seem to be aware of and so much beautifully crafted music goes unnoticed it hurts a little.

Name three tracks, any genre that you never get tired of

You have DJ’ed alongside some of the biggest names in Jungle & DnB, is there a stand out moment from any of these events you have played?

I have been lucky enough to play on the same stage as Dillinja, Digital, Marvellous Cain, DJ Hybrid, Equinox, Tuffist, Dave Owen, and Chris Inperspective.

Every moment is a stand out moment, it’s always an honour to share an environment that is dedicated to a sound that you love and experience it with the people who built that sound and others who share your passion for it.

You have been releasing on the Ghetto Dub label for a number of years, how did this relationship come about?

I’m Vinyl Junkie’s secret love child…….
I think it actually came to be after a release I had on either DJ Hybrids label ‘Deep In The Jungle’ or Papa Gee’s label ‘Hazardous Musik’ in 2015. Vinyl Junkie reached out to me and that’s when I put together the ‘Nothing Changes EP’ and it grew from there.

Tell us a bit about your vinyl release on Ghetto Dub

I’m terrible when it comes to describing my own tracks, I often find myself disliking most of them before anyone else has even heard them, and that is only due to my desire to improve and produce music to a standard that seems to be constantly running ahead of me.

There are so many wonderful producers out there who drive me crazy because I can hear the difference in quality and I want to reach that level yet, always trying to obtain something that is seemingly unreachable, is what makes it such a pleasure to be part of the scene. If I wasn’t chasing anybody it would mean that I was uninspired and that’s a sad reality that I never want to face.

Anyway, these 4 tracks at the time were my best attempt to pay my respects to the diversity within the scene by trying encompass a little bit of the influence of the 93-96 Jungle era.

It’s Jungle, what more do you want from me???